Advance Hunting is a daily even occuring twice per day. Silver, experience and bounty may be obtained. It may be accessed through Online Events during the event time. 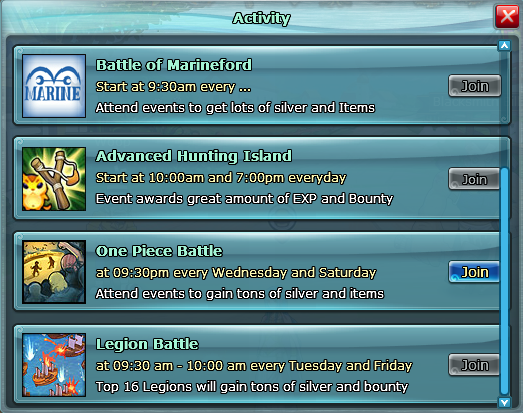 Advanced Hunting requires you to defend a Hunting point against your opposing affiliation i.e fight against Westerns if you are an Eastern. 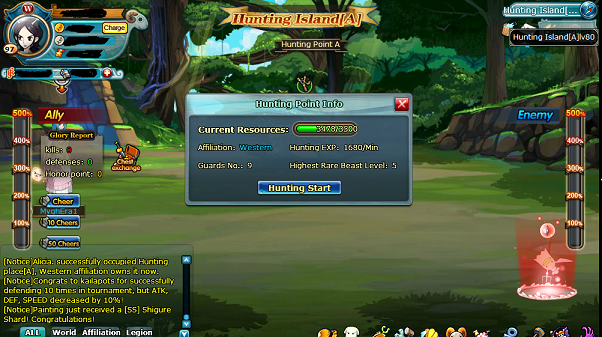 Hunting point is divided into several units starting from 0 to 30+ depending on the number of participants.

Defeating the last defendant will make you the first line of defense of the hunting point if no other Hunting Point is occupied by opposing affliation.

Only one affiliation may occupy the hunting point at a time.

Each successful defend will attribute 10 honor points to the defendant.

Players from opposing affiliation will have to attack the defendant to take control of the hunting point.

Each successful attack will be rewarded with 10 honor points.

The Hunting System is divided into brackets for different levels e.g. lvl80-89 hunting area and lvl70-79 hunting area. This will ensure that level difference between players will have the minimum impact due to power levels.

Each successful hunt will reward the player with a certain amount of experience and a chance to receive a Rare Beast. Hunting takes 30s.

The amount of experience gained will vary with level as well as Rare Beasts Level.

500 honor points may be exchanged for a hunting chest which contains 100k silver and bounty beasts.

Retrieved from "https://pockiepirate.fandom.com/wiki/Advance_Hunting?oldid=32997"
Community content is available under CC-BY-SA unless otherwise noted.